Feature: Start screen layout could use a dynamic re-arrange when choosing different buttons

When first opening Meld, the 'New Comparison' dialog is shown like so: 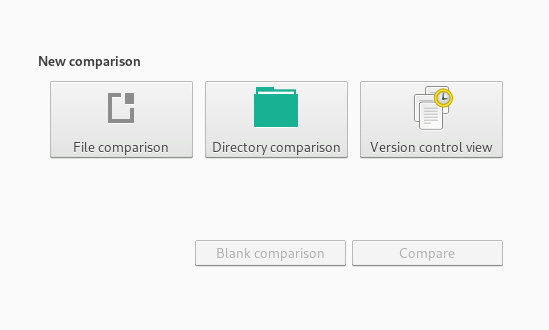 All of the 3 main 'Comparison' buttons are on the same line together. So now, when one clicks the 'File Comparison' all the button stay lined up but there is now a new section of dropdown buttons that are displayed directly under:

Notice how the dropdown buttons appear to also line up directly under the 'Directory Comparison' and 'Version Control View'. This can be confusing because although the user has chosen 'File Comparison' it now looks like the UI is involving the other 2 options in to the mix.

Here is a proposal on how to spruce up the UI so as to differentiate the options from each other.

Edit:
The gif only shows the UI usecase for when 'File Comparison' is changed but the requests obviously extends to the other 2 buttons, 'Directory' and 'Version Control'.