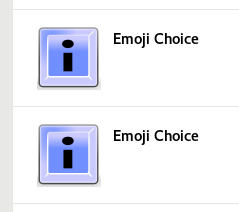 Since I don't care much for the IBus emoji chooser, I figured I'd remove it. So I clicked on the "Remove" button on the first of these two.

At this point, Software lost its "Updates" tab, which made me think something had gone wrong.

These 2 "Emoji Choice" apps are provided by the ibus package (that seems wrong in itself as well). The gnome-shell package requires the ibus one.

Regardless from the terrible packaging in IBus, it seems very wrong that Software would remove the Shell and GDM from a running GNOME session.