Over time, however, GJS gained the ability to override vfuncs, but the workaround was never removed. This merge request removes all the usages of Shell.GenericContainer throughout the codebase.

Shell.GenericContainer exposes the size negotiation machinery through the use of signals. Signals are not specially performant. One of the reasons is that they acquire a global lock for signal handlers lookup. GNOME Shell has more than 2,000 actors at any given point in time, up to 20 levels deep in hierarchy, making size negotiation and painting non-trivial tasks. Such a critical section of Clutter's machinery shouldn't rely on signals whatsoever.

Besides that, Shell.GenericContainer is a workaround to a non-existing issue anymore. It shouldn't be used anyway, regardless of any performance improvements that removing it can potentially yield.

Most of the work of removing this class were centered in turning the JavaScript classes that used it into St.Widget subclasses. That way, it was possible to override the size negotiation vfuncs.

The this.actor pattern was kept for compatibility purposes -- even though the JavaScript classes are the actors themselves. This is mainly to avoid breaking extensions. Even if the pattern was kept, internally, all the foo.actor usages were converted to only foo.

The commit messages, in particular the first ones, expose the challenges and solutions of removing this class. Fortunately, no outstanding hacks were introduced, and overall the code looks cleaner.

This merge request may have a small but consistent performance benefit. In average, the framerate became more stable and predictable. In addition to that, it became slightly shorter. That leads to better framerate measurements over time: 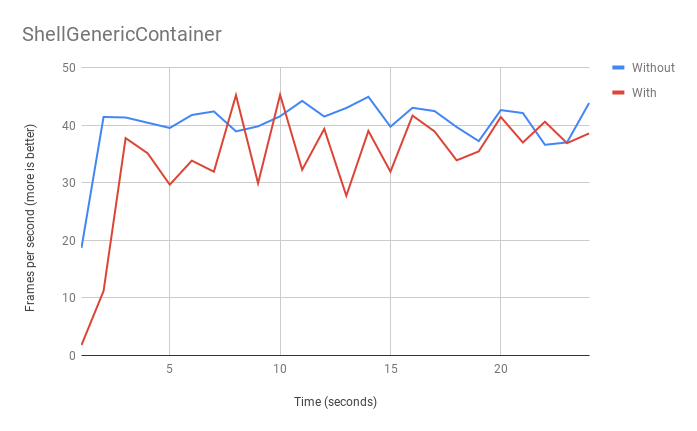 When using Shell.GenericContainer, the framerate is more unstable compared to this branch. There are moments where the framerate matches this work, but most of the time, it sits comfortably below it. Early results give an improvement of about 3~6 FPS when running GNOME Shell animations, like the spring animation of the Icon Grid, or moving in and out of the Overview.