Also use the window height to determine whether to show the "positioning accuracy circle" or not, or make that circle less in-your-face

When using fuzzy geolocation (ex: provided by the ISP rather than a GPS), on a 4:3 or square screen, GNOME Maps's heuristic to determine when to stop displaying the big blue "inaccuracy" circle around the positioning marker works "reasonably" well. In such a case, this is the last zoom level at which it displays: 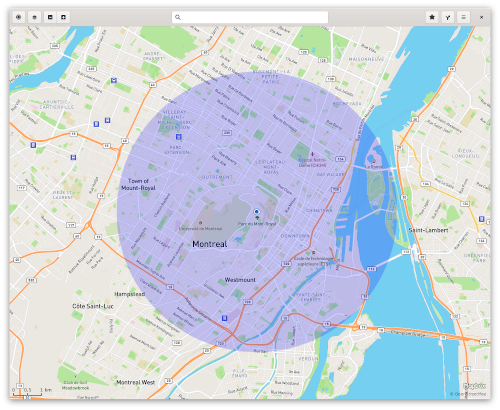 However, it seems to only use the window width (?) to guess when the circle is "too much to show"... and that fails when you're running widescreen, or ultra-widescreen, as it increases the zoom level required to have the thing "out of your view" and it just blocks more of the view anyway:

If you have an ultra ultra wide screen, you get this:

As you can see, this results in the Shimmer taking over not just the lighthouse, but also the surrounding beach, the whole forest, and eventually consumes Natalie Portman.

While we're at it... could we have something less obnoxious than a big dark blue semi-transparent solid-filled circle? Maybe it could be a radial gradient, becoming more transparent as it comes inwards to the center? And/or use a big fat dashed circle perimeter line instead of a filled circle? Unless it's accurate (and thus small), the circle just gets in my way 90% of the time.