Using OpenQA we can install the nightly GNOME OS images in a virtual machine, and simulate user interactions to test that it boots to a working graphical desktop. We can then do more integration testing of GNOME as a whole via the Shell and the core applications.

OpenQA has some useful online documentation. Be sure to look at the starter guide, tests developer guide and users guide.

Deployment of openqa.gnome.org is documented here.

The OpenQA tests run as part of Gitlab CI and can be started manually as follows.

On an open merge request:

To run the tests against 'master' or a branch with no open merge request, first start a pipeline and then follow the steps above.

We would like to run the tests for every MR, which requires us to first speed up the iso-installer job.

Tests can fail for several reasons. You will see the failure in the Web UI at https://openqa.gnome.org/, and the corresponding Gitlab CI job will also fail.

First check the "Logs & Assets" tab. Most useful is autoinst-log.txt, containing the log of installing the ISO and running the testcases - this should log what went wrong. The video.ogv file can also be useful to see what went wrong.

If you see "no candidate needle matched" or "assert_screen failure", this indicates a graphical change meaning the screenshot no longer matches. If the UI change is intentional then we will need to update the needle.

The OpenQA Web UI lets you compare the actual screenshot with the expected ones. Select a needle in 'Candidate needles and tags', then use the orange slider to see differences. The 'landscape' and 'eye' icons in the list switch between area-only or full diff. In the screenshot below, we have the expected image (installation completed) on the left, and the actual screenshot (installation still in progress) on the right. 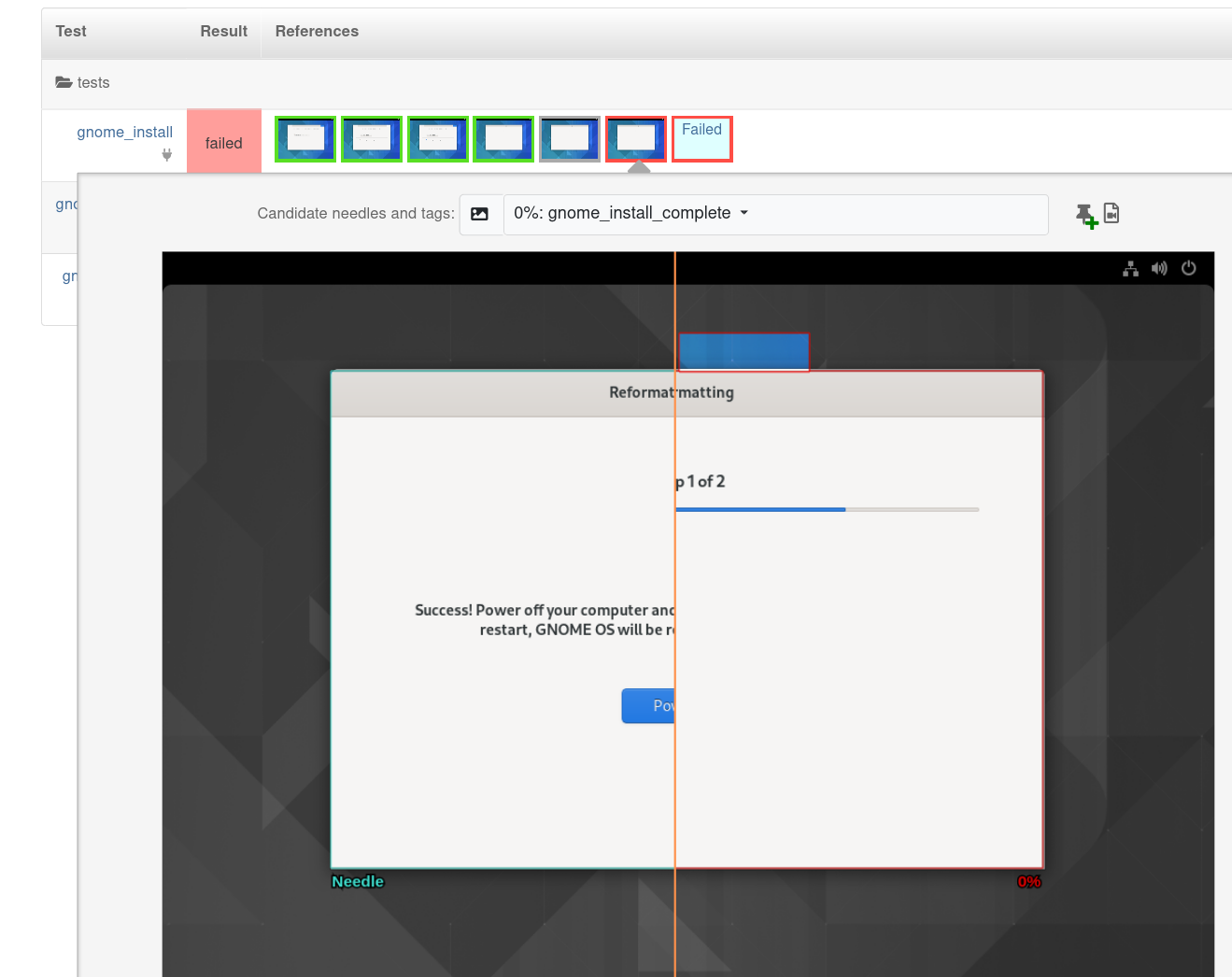 If you think the test failure represents a bug, open an issue against the relevant component. Otherwise, or if in doubt, open a gnome-build-meta issue.

How to update a test

Test scripts live in gnome-build-meta in the openqa/ folder. If you need to modify the test itself, create a branch of gnome-build-meta as normal with your change. The test pipeline will run with your version of the tests, and once it passes we can merge this to master.

Needles live in openqa-needles folder, and the master branch is used by all tests. Multiple needles can have the same name, and OpenQA will pass a test if any one needle matches. If you need to modify a needle, the workflow is to create a new one, and the preferred way is to use OpenQA's developer mode as follows.

OpenQA can be used to test anything that gnome-build-meta builds. We must be able to maintain the tests with volunteer effort, so try to write tests only around parts of the UI that won't change frequently.

The how to write tests documentation is your starting point for adding a new test.

Some distributions are already testing GNOME with OpenQA, and you may find you can adapt an existing test. Here are some we know of:

When adding or debugging tests you probably don't want to wait for a full Gitlab CI pipeline. You can run the test suite locally if you don't mind doing some preparations. You will need Docker / Podman to run the tests, and jq.

It's common to use save_screenshot when writing testcases, which gives you a .png which you can then convert into a Needle.