Normal (Legacy) Layer Mode: Not outdated at all

Description of the feature

It may be a bug report or a feature request...

As discussed in German here, users may be disoriented by the legacy Layer Mode "normal" being a bit hidden, possibly discontinued and generally not among the current Layer Modes. Apparently the new normal is a lograythmic something which may be useful for some cases and some not, see below and attachments.

The proposition is to take the legacy normal layer Mode into the current Layer Modes and name it "normal (linear)" or something.

1.: When using Color to alpha: The resulting semi-transparent image, put in front of a layer of the removed color (in the attached case: white) will not appear as the original, as long a the new normal is being used. The legacy normal meanwhile does the job. See the row "legacy in front of White" in comparison the original squares.

2.: The new normal is not what one will see in other applications e.g. the exported partly transparent PNG being displayed in front of white by typical image viewers or editors like Inkscape or the preview of the png-attachment to this post. 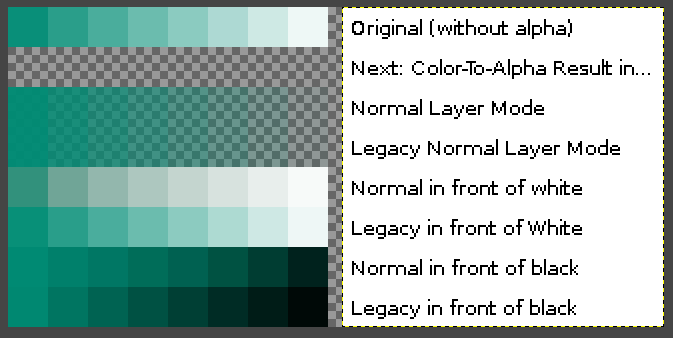